The Grand Marshal for the 39th annual Twin Cities Pride celebration is Anne Phibbs, Director of the GLBTA Programs Office at the University of Minnesota.

Twin Cities Pride Executive Director Dot Belstler said recognition is long overdue for “the work she has done in the community and the work she does every day for students.”

Phibbs, who was GLBT Student Services Director at Metropolitan State University (MSU) until 2006, has worked for almost 18 years to help colleges better serve GLBT students and staff, while fostering inclusivity on campuses. 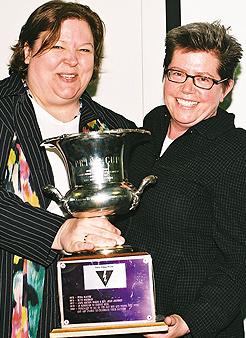 “My personal passion with Pride and the community is that we are reaching out to kids and young adults, and helping them find their place in the world,” Belstler noted. “Anne has been impactful. She empowers our young adults.”

Belstler said the nomination by Anne Hodson, a student of Phibbs’s at MSU, was heartfelt, and helped move the decision of the awards and community recognition committee.

Phibbs said she was honored and surprised to be nominated. She looks forward to helping realize the larger goals of the Pride celebration.

“All of us come together to create an active and progressive queer community,” Phibbs said. “Once a year, we take over Loring Park, and you get to see the breadth and depth of this community.”

Phibbs said she hopes to shed light on the work done in higher education to aid the GLBT community, while emphasizing that Pride is a way to bring stigmatized groups together. She clarified that the event often goes beyond GLBT rights, and supports a broader social justice movement against homophobia, racism, sexism, and other forms of discrimination.

“I hope people will come and take part in Pride, to be active in the community, and create a world that is more welcoming and affirming,” Phibbs stated. “For many people, this is the first time they see people who are like themselves and people who feel like they can be accepted as they are.”

Phibbs, who has been an out lesbian for 31 years, is a mother of two children. She said she brings both her professional and personal experiences to the table.

In 2008, Phibbs’s professional achievements were acknowledged when she received the Minnesota College Personnel Association’s Voice of Inclusion Award, which recognizes individuals and programs on college campuses that create a more welcoming environment for students.

Phibbs has been an advocate for GLBT issues, and has helped to prevent harassment and discrimination based on sexual orientation and gender identification.

As its mission states, the Twin Cities Pride celebration gives the GLBT community and allies a chance to “commemorate and celebrate our diverse heritage, inspire the achievement of equality and challenge discrimination.”

Phibbs explained that the event “is something we should be proud of as a community,” adding, “I am proud that we can keep it free of charge, and anyone can attend. That accessibility is important.”

On June 25, Phibbs will kick off the festival with a speech, and she will lead the parade the next day.