Andrew Christian From Rags to Britches

If you spotted clothing designer Andrew Christian pounding the star-studded pavement of Hollywood Boulevard, you might mistake him for a cleaner-cut Colin Farrell, or, perhaps, a more rugged Robin Thicke. But Christian is neither a reformed drunk from Dublin nor a pretty-boy R&B balladeer. Still, the 29-year-old Christian oozes sex appeal with the best of ’em. Especially in his underwear. 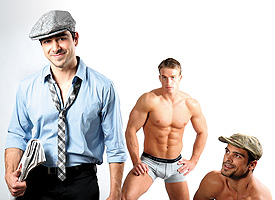 Born and raised in Fresno, California, Christian moved to Los Angeles at age 19. He is the proprietor of Andrew Christian Inc., the up-and-coming clothier that’s giving Ginch Gonch and other alternative fashion houses a run for their money. Once a fledgling brand back in the late 1990s, Andrew Christian is now a popular and, more importantly, profitable endeavor that’s outfitting gay America, from its skintight shirt obsession to its super-low-cut skivvies.

Perhaps you’ve heard of Andrew Christian. If you haven’t, then surely you’ve seen its ads. They feature taut models in various positions of bare-chested brotherly love, clad in nothing more than a pair of briefs.

By now, every in-the-know homo should have stumbled upon the single-shot spots. That’s because they’ve appeared in myriad fag rags from DC to Dallas, New York to Newport. Beach, that is.

But while these scenes of PG-13 playtime emit an aura of sex and excitement, Christian’s company wasn’t always a label to which consumers flocked. In fact, it wasn’t until recently that anyone knew it existed at all.

Christian’s story starts out like those of most who head out West with twinkles in their eyes and a few dollars in their pockets. But unlike other hopefuls who land in LA seeking fame and fortune, Christian was content attending college to become proficient in his passion.

Of the schools he applied to, LA Trade Tech—which the designer describes as “the more ghetto of the design schools in LA”—accepted him, giving him the experience he needed eventually to fly solo.

“I moved here to go to school for fashion design,” Christian says from the floor of a Las Vegas fashion convention. “I worked for clothing manufacturers like KikWear, and did freelance for Freshjive, while working on my own line on the side. Even while working for these companies, I knew I wanted to do my own thing. I used them as more of a learning experience, a steppingstone.”

While that springboard proved worthwhile, Christian encountered problems along the way, namely, moving his products. Although he describes the Southern California fashion scene as easier to break into than other areas, it still wasn’t a weekend in WeHo.

Like most companies, his startup was barebones and barely on its feet. Christian knew he had marketable merchandise, but he wasn’t sure he had the funds to follow through. Ever determined to claim his piece of the American pie, however, he buckled down, and made the best of his most abundant resource: himself.

“I was basically doing as much stuff on my own as possible,” Christian recalls of the first few years on his own. “I kept my payroll as low as possible. I ran my own errands, cut patterns myself, invoiced, packed boxes myself. I was working very long days and weekends.

“The toughest thing was getting people to know who you are. There are a million different companies out there—that was the biggest obstacle to overcome. There were lean times when I thought I wasn’t going to make it, but I always believed I could do it. I just said, let me stick with this until I absolutely can’t do it anymore. Finally, it paid off.”

It’s paying off big time, too. Not only is Christian shipping his goods across the nation, but also he is exporting them to customers in other countries. In addition, he has a list of celebrity clients that includes comedian Alec Mapa and former Queer Eye guy Jai Rodriquez.

Why all this sudden attention? Why, after 10 years of snipping and clipping, has the Andrew Christian clothing line only recently taken off?

It’s simple, really: Christian became a contender in the Battle of the Bulge.

When Andrew Christian underwear debuted earlier this year—it was strictly sportswear beforehand—the vast array of colors and styles wasn’t the only thing that demanded the attention of potential customers. Also piquing interest was an adjustable elastic strap sewn into the inside of each pair that worked as a sort of WonderBra for the nether region. That’s right—dubbed Show-It Technology, Christian’s groundbreaking briefs, boxer briefs, and jockstraps featured a device that offered PR for the penis while holding the male anatomy proudly in place.

“Whether you’re male, female, straight, or gay, it seems that most agree that size matters,” Christian states sheepishly. “Show-It Technology just facilitates the ‘bigger is better’ theory. It assists guys in showing off what they have.”

Or don’t have, as is sometimes the case. But that’s neither here nor there.

Though the line initially helped secure Andrew Christian a place on the fashion map, Show-It Technology was discontinued just a few short months after its launch.

Christian explains that even though the “technology” was helping to broaden Andrew Christian’s fan base, it ultimately scared a certain segment of its constituency.

“Seems like [Show-It] freaked out some people who are a little more conservative,” Christian admits.

While Christian hopes that eliminating Show-It from his underwear will help generate a greater acceptance of the line, it doesn’t mean he has abandoned all attempts to innovate. Just the opposite is the case. Taking what he learned from his initial outing, the buff-bodied designer is launching a new feature in the near future.

“For next spring, we’re introducing one style that has a sort of butt lifter in it, called the Flashback,” Christian reveals. “I just previewed it to all my stores, so we’re going forward with that for January.”

Another new announcement from Christian is his company’s association with runway-walker-turned-reality-show-renegade Janice Dickinson. The pair have teamed up to place Dickenson’s models, from her eponymous modeling agency, in Christian’s clothing.

“We approached [Janice] about using her models in next year’s campaign,” Christian observes about the world’s first and arguably most controversial supermodel. “We went in, and did a model casting with her, as well as a photo shoot with her male and female models for underwear.”

As a result of this win-win spin on piggyback advertising, new models now are appearing on the Andrew Christian Web site. Plus, The Janice Dickinson Modeling Agency will air episodes featuring Andrew Christian when the series returns to television for its third season in 2008.

Notwithstanding a brief turn as a stone-faced strutter—“At one point in the shoot, Janice and I had to demonstrate to the newbie models how to runway walk properly,” Christian quips—the former Fresnan since has returned to the real world, where real work is required, to ensure that his supply of package-promoting products meets its current demand. That means nothing less than continuing creatively to pioneer everything bearing the Andrew Christian logo, a Swiss-inspired cross.

And you can bet that will include even more cheeky concepts.

“I definitely see us doing underwear, continuing with that,” the entrepreneur relates. “New fabrics, more breathable fabrics, ecofriendly fabrics. We’re also trying to get actively involved in the communities. People appreciate us coming to them to show them our products, so they can see the quality, and understand that Andrew Christian is a real person, and not just a big corporation that doesn’t really care about them.”

It’s a philosophy that, considering the source, gives bold new meaning to having a heart on.

Michael A. Knipp is a 26-year-old Baltimore-based freelancer and the founder of Line/Byline Communications. He can be reached at [email protected].