Three Decades, Four Generations of the Blooms at the Gay 90’s

At 28-and-a-half years, they hold the longevity record for owning a gay bar in the Twin Cities. For nearly three decades, the Bloom family has been at the helm of the historic landmark at Fourth and Hennepin in Downtown Minneapolis. So, it’s no wonder the news has spread like wildfire that they’re selling the bar they’ve owned so long. 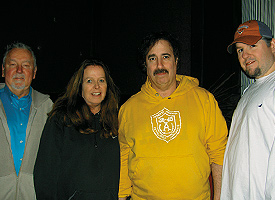 In 1979, Mort and Marcia Bloom, now retired, bought the bar, which then consisted of the Gay 90’s main bar and the Happy Hour bar on the first floor. Their son, Mike, and his wife, Mary, the present owners, helped manage the club from the outset. As well, Mike and Mary’s children, Paul, Charlene, and Corey, were involved in operating the bar from their teens. At an even younger age, a fourth-generation Bloom, Paul’s six-year-old precocious son, Braden, has been accompanying his father to work.

Manager Joey Yankovich had been at the Gay 90’s several years when the Blooms purchased it. He’s also a record holder, as no one has been the manager of a local GLBT bar longer than he.

From the initial two bars, in the 1980s and 1990s, the Blooms expanded the establishment to encompass an additional four components upstairs and next door: the Men’s Room, Dance Annex, Retro Bar, and La Femme Show Lounge. Today known far and wide, the Gay 90’s long has been the Upper Midwest’s largest gay entertainment complex.

But the real legacy of the Blooms is what they courageously have done for the local gay community.

Mike says, “From early on, even though we’re straight, we have been the biggest advocates for the gay community. We kept doing what we thought was right, and it worked.”

Mary adds, “Our children encountered a lot of prejudice when they were in high school, because their family owned a gay bar during the time of the AIDS crisis.”

As Paul recalls, “A number of times, I got in fights with kids defending my family’s reputation. Ironically, some those people are now our customers.”

Mike beams when he states, “Over the years, we have had many ‘firsts’ at the Gay 90’s.

In 1986, the bar hosted Super Sunday, the first local AIDS fund-raiser, followed by Healing of the Hearts for a number of years. A bevy of local organizations, such as the Twin Cities Gay Men’s Chorus and the Imperial Court of Minnesota, got their start at the 90’s.

Mike’s greatest sense of accomplishment is another first: the integration of the gay and straight communities in the club. But that came at a price.

In well-deserved recognition for their contributions to the Twin Cities gay community, Mike and Mary were named Pride Honorary Grand Marshals in 2000.

Yankovich sums up the feelings he and the Blooms have as the bar changes hands: “We’ve certainly seen a lot of changes over the years. But we’re very proud of how we and our staff have helped our community.”