It has been 10 months since Mike Gerle became International Mr. Leather (IML) 2007. I recently interviewed him by telephone from his office in West Hollywood, California. (Although he likes the way his given name, “Mikel,” is written, he prefers to be called “Mike.”) 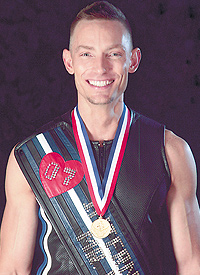 Before you became IML, did you have any ideas of what it would be like?
I always say I’m not superstitious, but I wouldn’t let myself fantasize about being IML, because I didn’t want to be devastated when I most likely wouldn’t win.

You didn’t think you’d win?
I thought I would be a good IML, but I didn’t think I looked the part. I thought some of my ideas were a little too nonconventional. So, I didn’t expect to win.

What has your title year been like so far?
It’s been amazing. I feel like I’m in mile 23 of the 26-mile marathon, and it’s a wild place to be. At first, the avalanche and the pace were unbelievable. I couldn’t believe how many decisions I was being asked to make on a regular basis, and things to prepare for, and things to weigh in on. And I have a full-time job, too.

And that job is…
I’m called a Management Specialist for the City Manager of West Hollywood, California. I’m his boy, is the best way to describe it. I’m the gatekeeper. I generally redirect traffic and handle problems, and I allow him to handle the big-picture things with the City Council, and political and strategic issues that come with running a city. And I do lots of other things, like helping the Mayor with the gay men’s forum.During this year, my personality seems to have shifted in a way that they really like at work, and so, they want to give me more stuff to do. So, I’ve gotten used to living in this constant state of demands on my time. I’m not the most flexible person, and the year has taught me to be flexible. Everything in my closet is usually organized and color-coded, and things are binned and categorized, and I’ve learned this year that the world keeps going if that’s not the way it is.

Are you ready for your year to end?
I really am, because there’s so much I want to do that I can’t, because I’m constantly packing and unpacking, and going somewhere.Have you made plans for what you’re going to do after your successor is sashed?I will enjoy having the freedom to take advantage of all the contacts that I’ve made and all the ideas that have popped up into my head, and actually do something. There’s so much to do in Southern California. There’s so much rich leather and gay history out here that needs to be captured—soon. We’ve got a lot of senior members of the tribe, and we need to find out everything they know, and get it on video.

And then, there’s fostering the youth. I’m convinced after my year that we are very far away from fading into nothingness—we’re on the verge of exploding into this diverse eruption of fetish and kink. Leather will always be part of that, and leather will always be the father or mother of that entire thing. But it’s going to be so much bigger and more fascinating. I’ve seen some real energy in some young people. One of these young guys is not interested in anything other than black leather, preferably Tom of Finland-style—what we like to call old school. That’s the only thing he’s interested in. So, we don’t need to worry about it going away.We’ve gone through a generation where people died off, and there wasn’t an orderly handing-over of the reins. But now, we have people who are alive and getting older, and they’re just going to have to make a conscious effort to pass it on to the next generation. The good news is, we have tons of young people willing to do a lot of the heavy lifting. We just have to take our white-knuckle grip off some of the things that we’re holding onto, and give them pieces that they can do.

At IML, you’ll be on the other side of the judging table this year. What do you think that will be like?
I’ve judged so many contests by now. The first three or four, I would get really nervous, and now I don’t. Although, IML will be different, because it has dominated my headspace, so, I think I’ll be very emotionally tied into that. It’ll be an interesting experience to sit in on all those interviews. I’m both dreading and really looking forward to being able to get to know so many men on that level.

And you’ll be giving your IML stepdown speech, too.
My goal for my stepdown is: one, for you to remember what I talked about, not how long it was; and, two, for you to go, “That’s it? I want more.”Visit Gerle’s Web site at www.iml2007.com.