An Interview with Joanne Gaddy 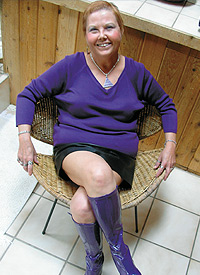 How did you get started at all this?
I came into it sideways. I left my ex-husband a little over 20 years ago, and met a gay man, and he and I became friends. One day, he was going to an early fund-raising meeting for Chicago House, which was a residence for people living with AIDS. I told him I’d be happy to go with him if they didn’t mind a straight female. Well, I was, of course, welcomed with beyond-open arms. It was at Thom Dombkowski’s house. [He’s a former Chief Judge of the IML Contest].

We were working at a table with two of the Chicago House board members, and one of them called me the next day, and said, “Would you consider doing minutes of board meetings?” So, I started doing that, which led me to meeting a couple more leathermen. I’m also a member of MENSA, and I joined the MENSA gay special interest group, and met another bunch of leathermen there.

Wednesday night before IML, the first thing they used to do was photo badges. I was in the orientation, and Bill came to me, and said, “Can you turn on a typewriter?” I went into the office, turned on the typewriter for the girl, and then, I did all the badges. Well, within a day, I was told, “By the way, you’re running the office next year.” I said “Oh. OK.”

Another friend who was involved with IML had one of those electronic BBS things, and he kept telling me I had to log into it. Finally, one night, I did, and I discovered a posting from a straight man about the Chicagoland Discussion Group (CDG). And I remember sitting in front of the computer, going, “Straight people do this? You mean there’s a chance I might, like, get laid, too, and get to play?” So, the leather community has changed my life.

Why did you give up being Mistress of IML?
I went out on medical disability, and I did IML a little bit after that, but my health was such that I just couldn’t do it anymore. I have scleroderma, an autoimmune disease in the same family as lupus and rheumatoid arthritis. The body produces too much collagen. It’s mostly attacked my digestive system. During the last surgery a couple years ago, they took out my esophagus entirely. As my gastroenterologist said, “Your esophagus will give you a lot less trouble on the pathologist’s table.”

How does MENSA interplay with leather?
Somewhere in the late ’80s or early ’90s, I started doing programs at MENSA gatherings called “Intelligent SM.” So, I’m kind of single-handedly responsible for bringing a lot of kinky MENSAns out of the closet. There really is a very significant crossover between intelligence and kink. I’m frequently telling people in the kinky world to join MENSA, and vice versa.

You’re now doing weddings as an ordained clergyperson with the Church of Spiritual Humanism.
A girlfriend from the kinky community and her fiancé wanted to get married at Sinsations a year ago, and they asked if I would get an online ordination, and marry them. After doing that wedding, I wound up with two more kinky couples, and then, I got an e-mail from somebody who found me on the Spiritual Humanism site. I decided I was making this a business, and started advertising on wedding sites and in run programs.

A friend designed my vanilla Web site, and as soon as we get a chance, he’ll be doing my kinky Web site. It’s going to be Power Exchange Weddings. For the vanilla site, I’ve got a clergy robe and stole, which, of course, makes me look totally angelic—which is just hysterical. For the kinky site, we took a picture of me in the clergy robe and stole, but it’s open, and you can see the corset, and I’m dangling handcuffs and a whip. “Let the mistress marry you.”