Television actress, film star, and recording artist Gloria Reuben, a 44-year-old Toronto native, has an impressive career in the entertainment industry. She starred on ER as television’s first regularly reappearing HIV-positive character, Dr. Jeanie Boulet, in a role that eventually earned an Emmy nomination. Her work has inspired her HIV/AIDS activism for the past 13 years. 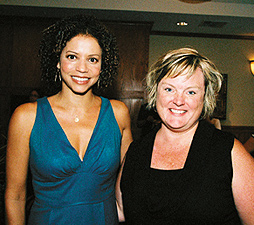 Reuben appeared in the HBO movie Life Support, which follows the life of an HIV-positive woman who worked for an AIDS organization. As well, she introduced former United Nations Secretary General Kofi Annan at the 2004 UN World AIDS Day Convocation, and delivered the keynote address at the 2005 Black Women’s Conference on HIV/AIDS.

In Reuben’s most recent endeavor dealing with HIV/AIDS, she spoke at the Minnesota AIDS Project’s 2008 Allan Spear Forum in Minneapolis. Prior to the event, she talked with Lavender about her career, her involvement with HIV/AIDS activism, and what keeps her going.

I read that when you left ER, there was a heated dialogue with producers about how you wanted your character to leave. Is that true?

There had definitely been some very tense moments, because some of the producers had wanted her to die, and frankly, I felt very strongly that we shouldn’t do that, because of the character we did create, and because we showed her living with the virus, and that was the reason to do the story line—to show someone living with it. I think for people who are HIV-positive around the world, the image out there of this woman living with the virus instead of dying is a powerful one.

It could have been easy to leave the HIV/AIDS issue as just something your character dealt with on television, but you stuck with it, and carried it into what you’re doing now. Why make that decision?

I kind of walked away from it for a good three or four years, because, frankly, when I left the show, I was exhausted. Doing the story line was heavy, and I’m not the kind of actor who can switch it off and on, so, emotionally, I was wiped out. And in addition to that, when I left the show, I kind of felt like my work was done—like I did my part. But it wasn’t until a few years ago, even when it wasn’t on the front page of the newspaper, which it should have been, where I started reading about statistics, especially in the Latino and African-American communities, and particularly with women, that AIDS was the number-one killer of young black women between the ages of 25 and 34 here in the United States. I was, like, what the fuck is going on?—like, wait a minute, I thought things were getting better. So, I thought, because of the role I did, I needed to be out there, and once again get those basic messages out there of awareness and prevention, and kind of raise the flag again.

HIV/AIDS is probably still seen by many as only a gay man’s disease. How do you see homophobia playing a role in infection rates?

Homophobia is one of the key reasons why the “down low” is so significant in the rate of new infections for women, because men having sex with men, in the majority of the African-American and Latino communities, is considered taboo. You’re considered not a man. It’s just the worst thing you could be. So, there’s unprotected sexual activity that happens with men having sex with men, because of this distorted stigma that’s based around homosexual behavior. That kind of shame literally perpetuates people going “down low,” hiding in the shadows, and participating in sexual behavior that they feel shamed about, because their communities are shaming them. And meanwhile, on the flip side, it’s like you’re a man if you have multiple female partners. So, the combination of both is just a disaster.

So, where do we as a society go from here?

I don’t know, and believe me, sometimes, I hear what I talk about, and I think I am way too much on this stupid soapbox, and I’ve got to get my ass down off it, because I have my own issues, and I am certainly not perfect. But I want to somehow get the core message out there of no matter what or who it is, we have to talk openly about these things, and we have to quit this shame game, because that’s what’s perpetuating this pandemic. People are afraid to talk about it. So, everybody needs to step up. The federal government needs to step up; the state government, people in their communities, the churches, individuals need to step up, and get educated and get tested. There’s no reason not to know basic facts about how it’s transmitted and how it’s not. Those things alone will make a huge difference.