A Strong Foundation for Female Athletes

Two years ago, Shelly Boyum-Breen’s oldest daughter tried out for a select volleyball team. If she made it, the fee for the season would be $3,500. If she didn’t, it still would cost $800 to play on a non-all-star team. Boyum-Breen—who was working in sales for the WNBA—and her partner, Trenda Boyum-Breen, a college administrator, knew they could find a way to come up with the cash. But they worried about all the girls who, deterred by the prohibitive price tag, did not even try out. 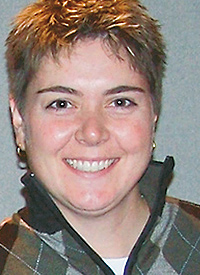 Shelly Boyum-Breen grew up in Northern Minnesota surrounded by sports. With four older brothers and active parents, she started golfing at age 4. In school, she played volleyball, basketball, and tennis, plus a bit of hockey at the neighborhood rink. She was a golfer and basketball player at the College of St. Benedict, until sidelined by major back surgery.

Boyum-Breen transferred to Augsburg College, where she served as student assistant basketball coach. When the head coach quit during Christmas break, she was named co-head coach—though only a college junior.

After graduation, Boyum-Breen became a physical education teacher (“How fitting,” she laughs). She coached basketball, tennis, and track, primarily at Anoka High School. She loved watching her players grow.

But when she lost her teaching job because of budget cuts, Boyum-Breen became a sales manager for the Minnesota Timberwolves and Lynx. Later, she moved into a WNBA sales consultancy slot.

Her daughter’s volleyball tryout came at the same time that Boyum-Breen was seeking a new challenge. Soon, she and her partner devised a way to make sports more affordable for girls. Thus, Foundation IX was born.

Last fall, Foundation IX handed out $8,000 in grants to 45 recipients, ages 5 to 19. Awardees played basketball, hockey, and soccer; they participated in Taekwondo, karate, swimming, gymnastics, and dance, in scholastic and club programs across Minnesota. Unfortunately, officials had to turn away 300 applicants. Requests totaled $176,000.

Boyum-Breen is pleased with the breadth and depth of the awardees—and in the foundation itself, stating, “We have diversity on our board and in our donor base. And that includes sexuality.”

An out, proud lesbian, Boyum-Breen explains, “That’s a small but very important piece of who I am. Every day, I represent my wife, my two stepdaughters, our extended family—and the GLBT community—by upholding strong values.”

Boyum-Breen says that being a lesbian may influence Foundation IX in a subtle, subconscious way: “It’s really important in our discussions as a selection committee that our grants be diverse ethnically, economically, and by age and sexuality. We want to get the fullest representation possible of our applicants’ backgrounds, and remove any barriers we might have in the process.”

Boyum-Breen, pointing out that Foundation IX’s focus on girls has nothing to do with her sexuality, notes, “There’s no question that plenty of boys can’t afford sports, too. But 35 years after Title IX was enacted, the playing field is still not equal. Girls have more sports opportunities than ever in terms of participation, role models, and media attention, but there is still a long way to go. When girls and boys are equal, we’ll be happy to open our grants up to boys.”

Donors have been an equal-opportunity group. The Minnesota Thunder men’s soccer team played a benefit game against Major League Soccer’s Los Angeles Galaxy, with Foundation IX as a beneficiary (David Beckham posed with one of the grant recipients). Minnesota Roller Girls helped raise funds and awareness. Friends and family of two young women killed in an automobile accident honored their memories by donating to Foundation IX.

So far, most of the funding has come from individual donors. But the General Mills Foundation provided an important start-up grant.

Boyum-Breen dreams of “finding girls throughout the country in need. We’d like to assist teams and organizations, too, with uniforms, equipment and facility rentals.”

Also in the works: postsecondary academic scholarships for girls who participated in sports and fitness activities.

As Boyum-Breen shares, “It would be nice to reach the point where there’s no need for us to exist.”

Tax-deductible donations may be sent to Foundation IX, PO Box 47128, Plymouth, MN 55447; or made online at www.foundationix.org.