An initial glance at Café Maude’s menu suggests French fusion. Baked escargot, a selection of cheeses, and certainly the pan-roasted duck breast served with red wine-poached pears could conjure lunch on the Champs-Élysées. 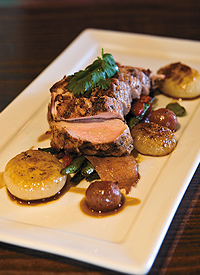 However, owner Kevin Sheehy deliberately has resisted the impulse toward a niche menu. Instead, he and Chef Aaron Slavice have worked to create a cornucopia of Sheehy’s favorite dishes: Moroccan chicken, hanger steak with cognac grilled onions, beef or pork tenderloin, jambalaya, hamburger…even an Asian-inspired rice noodle soup.

The neither-here-nor-there menu was a risk that seems to have paid off. Since Café Maude opened its doors in June 2007, it has been consistently busy. Perhaps it’s the comfortable yet upscale décor. Perhaps it’s that the lineup of small plates, salads, and à la carte items (in addition to more sizable entrées) invites a more shared dining experience. Perhaps it’s Sheehy’s commitment to feature great music.

“We have a DJ there on Tuesdays and Thursdays: Howard Hamilton III. He mines music from all over the world. And it’s just the coolest music you’ve ever heard,” Sheehy explains.

Café Maude attracts the best jazz musicians in the area on Friday. Saturday is reserved for world or experimental music.

Considering Sheehy’s obvious passion for the menu and ambience—Café Maude’s motto of “Civilized Leisure” made incarnate—it probably would surprise many of the bistro’s frequent guests that his original plans for that space were for something completely different.

“I used to own the Dunn Brothers in Linden Hills,” Sheehy relates, “and somebody brought it to my attention that this space was available on 54th and Penn. So, initially, I was thinking about doing a Dunn Brothers, and combining it with a deli.”

However, a trip to Chicago, with all its wonderful restaurants, changed Sheehy’s mind very quickly, and Café Maude was born—named in honor of Maude Armatage, who served on the Minneapolis Park Board for 24 years.

Maybe Sheehy’s Dunn Brothers/deli concept would have gone over just as well, but the duck breast at Café Maude was divine. Unfortunately, my column deadline did not mesh well with the restaurant’s rhythm, as it is just changing the menu for spring. Thus, I was not able to try the halibut, which sounded lovely, and would be available for customers by this issue’s publication date. However, because the duck ($30) and homemade tagliatelle pasta with seared sea scallops ($20) were on both the old and new menus, my dining guest and I were accommodated well.

If one orders from the big-plate menu (where the duck is featured), a side or small-plate accompaniment may not be necessary. However, the pasta probably should be ordered with an additional side. As well, a series of small plates, ranging from $7 to $12, can be served tapas-style. It’s all up to you and your fellow diners.

The scallops were done very well. Readers of my previous “Off the Eaten Path” column featuring the exquisite La Fougasse restaurant will know my distaste for overdone, chewy scallops, and my joy upon finding them well-prepared. The ones at Café Maude were lovely and fresh—excellent with the homemade tagliatelle tossed in parmesan thyme butter.

I took a recommendation from my server, and had a lovely 2006 Carménère with the duck. He promised me the flavor was “slightly dirty” and very interesting. Always a fan of intriguing and earthy reds, I was pleased with the pairing, which balanced out the sweetness of the poached pears.

We also were treated to the seared ahi tuna ($12) from the small-plate selection, which made me appreciate that Café Maude has a wood-burning grill. The grilled bread conveys a hint of smokiness that brings out the best in the avocado mash, ahi tuna, and citrus vinaigrette.

If one is a fan of pistachio ice cream—and who isn’t—it’s worth it to save a bit of room for the chocolate pistachio torte ($7).

Reservations might be helpful, as the dining room and outdoor seating area tend to fill up quickly at certain time slots.

As Sheehy laughingly puts it, “People don’t want to leave!”

Those who wish to plan special events at Café Maude will be pleased that because of demand, Sheehy is planning to open The Armatage Room right across the street for private functions.