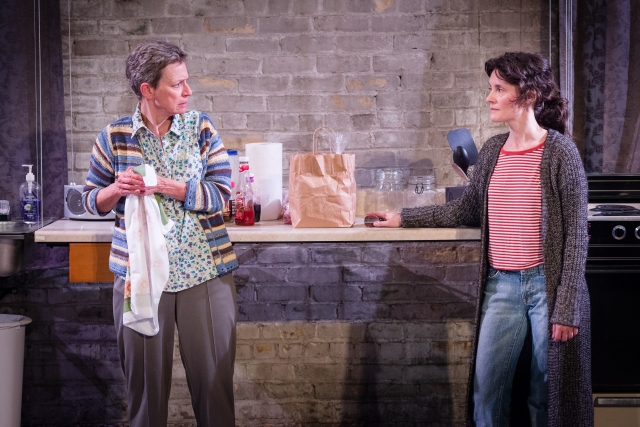 Marsha Norman’s ‘night Mother, winner of the 1986 Pulitzer Prize for Drama, is one of those plays where you may pinch yourself to see if you’re actually hearing what you’re hearing. Dark & Stormy Productions’ breathtaking revival directed by Hayley Finn is so intensely realistic you may find yourself doing just that. Right near the beginning, adult daughter Jessie (Sara Marsh), declares to her mother, Thelma (Sally Wingert), her plan to kill herself that very evening. Thelma never saw this coming, so is incredulous upon the hearing of it. Her shock is compounded and confounded by the fact that Jessie has thought through her suicide and its ramifications in meticulous detail from her mother’s food intake to what order to call whom after it happens. The duration of the play is a gripping mixture of Thelma grappling with Jessie’s decision, reasons that the epileptic Jessie has chosen to take her life, and a daughter’s disturbingly scrupulous preparation for her aging mother to take charge of the household post-suicide.

However, Jessie taking responsibility for a mother who has become a couch potato does not factor into her frustrations over what she has concluded is her failed life. If anything, it’s been the only thing remotely close to giving her life some semblance of purpose. Therefore, she wants to make sure her mother can handle the major shift from the living Jess to the dead one.
From within this emotionally fraught and beautiful play emerges humiliation and deceit pertaining to epilepsy and the fascinating way the two women perceive the husband/father, now dead, in such completely different ways. Without virtue-signaling, we intuit implicit commentary on issues of infirmity and the complexity of traditionally conservative men. Finn’s duo is tasked to perform a play that is written on a high emotional pitch from start to finish, and through it all, the pair finds significant variation and color amidst the text’s barrage of feelings. We hang on every word.
What is surely at the root of Jessie’s despair is being abandoned by her husband, her son’s criminal personality, and inability to hold down a job. She has no social skills and the rural environment in the contemporary South where she and Thelma have always lived offers no prospects. The talented Marsh gives perhaps her best performance to date, and she matches veteran Wingert marvelously. Marsh plays Jessie as a person drained of any drop of hope. It shows palpably in her face and physicality. Like many of us who grew up in southern cultural environments (like myself) in the mid 20th century, her accent is standard American. This has been attributed to the notion that after World War II, American culture with ubiquitous radio, film, and television standardized voices in a manner the previous generation was not subjected to. Marsh’s standard accent contrasts Wingert’s southern in a way that adds poignancy to the gulf between the two.
Moreover, Wingert’s accent is very specific. To my ear it is right out of West Texas, though others, including the actress herself, may sense it otherwise. Nonetheless, it is not one of these generic Southern accents I hear so loosely worn on local stages, television and film. Anne Bancroft in the film version of ‘night Mother, though psychologically convincing, lacked the full vocal truth Wingert provides. For Dark & Stormy, it comes from a place that’s just as deep as the emotions the actress is penetrating. Uncanny, vivid, and authentic. This is the sign of an holistically realized performance.
It has become old hat to praise Sally Wingert. She is the most acclaimed Twin Cities actress of our time and has been so for several years. Her Twin Cities performances in Spinning into Butter, Third, Master Class, and Wit are legendary. However, Wingert gets under the skin of Thelma in a more visceral way than I’ve ever seen her submit to in any role she’s ever played (and I’ve seen many of them). Unsurprisingly, like any actress worth her salt, she doesn’t fall into turning Thelma into another fecklessly inattentive mother. Rather than that, she crosses the Rubicon. It’s as if a curtain is opened on Thelma’s consciousness and we the audience are experiencing the terrible new awareness simultaneously with the character. What should have been revealed as tell-tale signs all along have been overlooked. The actress mirrors perhaps all of us who don’t see suffering right beneath our noses. We have all done that, which is what Wingert reveals. We are impelled to look at ourselves.
On the outside, it’s easy for anyone observing a mother and daughter like these to blame Thelma for failing to fathom her daughter’s dreadful misery. Yet let she who is without sin cast the first stone. As the great Norman is acutely aware of, even in those closest to us, we can only know so much of whatever misery someone is experiencing. Human beings are mysterious.
A closing note on Wingert’s exceptionalism specifically: Earlier this year she gave a terrific performance as Christina Drayton in the Guthrie’s Guess Who’s Coming to Dinner (reviewed in Lavender Issue 599). Though I hold Katherine Hepburn’s film performance in the role as perhaps the best performance by an actress in 1960s cinema, I said that Wingert made the same role organically her own. No trace of imitation.
This brings legitimate comparison of Wingert to Meryl Streep. Though Streep is older, she has had a tendency to phone in performances since her heyday which ended in the late 1980s after performances in Sophie’s Choice, Silkwood, Ironweed, and A Cry in the Dark had astounded film audiences (and these still do, thanks to film preservation). Her ease with accents, still so dazzling to so many, actually obfuscated the lack of dimension (and crude political jabs) in Julie & Julia, Prime, and The Iron Lady. And her dubious way of taking certain senior roles she was too young for away from older actresses better suited to them – August: Osage County for example- after she’d been so outspoken on the lack of roles for older women, spearheaded one of the finest plays of this century being made into a mediocre movie. An artistic tragedy. Had Ellen Burstyn or Estelle Parsons been cast instead, it would have not only been less ageist, it would have truly served the script.
However, Wingert, who also has a facility for accents, continues to make roles her own, whether it’s on the prestigious Guthrie stage or the modest stages at Bloomington Center for the Arts and Dark & Stormy’s Grain Belt Studio. Now that’s longevity, artistry, and integrity!
‘night Mother
Through Sept. 8
Grain Belt Warehouse, 77 13th Ave. NE, Minneapolis
(612) 401-4506
www.darkstormy.org