Ice skating in St. Paul’s Xcel Energy Center usually evolves into visions of bone-rattling hip checks and images of teeth-gritting slapshots, as perpetrated by the National Hockey League’s Minnesota Wild and their invading opponents, a manifestation of major league competition. But, during the week of January 20-27, while that same sense of rivalry still will be firmly in place, the sense of aesthetic will be very different, when figure skating spins to the Xcel Energy Center’s icy center stage. 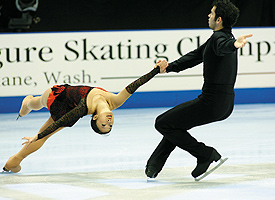 Figure skating is theater and athleticism, music and competition, risk and elegance, glitz and judgment—and, as such, it’s a sport perfectly suited for the GLBT crowd.

“I first saw figure skating in 1988 when I was a kid,” Wesley, 33, a fervent (and gay) figure skating fan from St. Louis Park recounts. “I watched Brian Boitano and [Brian] Orser during the 1988 Winter Olympics. I fell in love with the sense of drama and showmanship, and the grace of it all. I’ve been following the sport since then. Figure skating is my favorite spectator sport.”

And Wesley isn’t the only one. National Sports Survey II, the largest sports and lifestyles study ever conducted in the United States, ranks ladies figure skating as the second most popular American sport, after professional football. Accordingly, ladies figure skating is more popular than other athletic staples like major league baseball, professional basketball, and college football, all of which made the top 10.

The US Figure Skating Championships, which have been held annually since 1914, universally are recognized as the nation’s most prestigious figure skating event. They are presided over by the Colorado Springs-headquartered US Figure Skating (USFS). It is recognized as American figure skating’s premier regulatory body by the United States Olympic Committee, as well as by the International Skating Union. USFS lays claim to a hefty membership of more than 196,000.

USFS’s choice of venue was not a capricious one—on the part of the chooser or the chosen. The St. Paul Local Organizing Committee is a happy amalgam of the Twin Cities Figure Skating Association; the St. Paul RiverCentre Convention and Visitors Authority; and, naturally enough, Xcel Energy Center itself, which rallied hard to bring this event to the state capital. It’s just the latest of the St. Paul Local Organizing Committee’s sports-oriented successes, all of which revolve around ice sports or gymnastics.

In an official press release, USFS Executive Director David Raith said, “We are thrilled to continue our successful relationship with the City of St. Paul, the Twin Cities Figure Skating Association, and the Xcel Energy Center by awarding them the 2008 US Championships. They have exhibited a strong commitment to figure skating and to hosting first-class events.

Potential corporate partners were quick to endorse the championship with their dollars and their specialties. Local sponsors include HealthPartners, the Mall of America, Wells Fargo, and Green Giant, plus, most appropriately, Tom Collins’s “Champions On Ice,” a multicity tour that showcases new and established ice skating talent.

“I’m excited about the Championships coming to the area,” Wesley declares. “It’s good for me, because I can see them live, and it’s good exposure for the area. But I don’t think this is the first time figure skating has come to St. Paul.”

Indeed, the Saintly City is an old hand at hosting analogous national events. The X was home to the Campbell’s International Figure Skating Classic, an Olympics-related competition, in both 2004 and 2005.

Here in 2008, within the X itself, over the course of the weeklong winter drama, more than 125,000 people will spectate, dumping some $30 million into the local economy between events. Further, NBC Sports will provide the state capital with more than 15 minutes of fame by featuring 10 hours of live high-definition coverage of the US Figure Skating Championships. The highlight of this coverage will take place the evening of January 26, when the ladies free skate event will come to the fore.

“I kind of hate to admit this, but I only started following [ladies] figure skating after Tonya Harding,” Wesley confesses with a guilty chortle, recalling figure skating’s infamous bad girl who made headlines when she stood at the center of a controversy that involved the premeditated injuring of her chief rival. “That whole story taught me how competitive the women can be. It was a very dark lesson.”

While hockey’s success is measured in goals, championship calculations in figure skating are a bit more complex. Each performance in every discipline features a short, or technical, phase, followed by a long, or free, phase. The short phase is composed of eight required technical elements with linking steps. The long phase, which is more about artistic expression, is judged on technique, choreography, interpretation of music, originality of music, and quality of execution.

“I know it sounds weird, but that’s my favorite part of the presentation,” Wesley shares. “If you really care about the skater being judged, the wait between the performance and the scoring can seem unbearable. During the moments when you’re waiting for the scores to be posted, it feels like anything can happen. And sometimes, it does.”

The Ladies Singles is the most visible discipline, but three others will crown champions of various stripes at the Xcel Energy Center, including Men’s Singles; Pair Skating; and, gayest of all, Ice Dancing. Some 250 competitors from all over the Land of the Free and the Home of the Cold will vie for 12 titles.

Each is divided further into three levels of competition: novice, junior, and senior. Semantics aside, these skill levels don’t necessarily reflect the ages of the competitors. For example, the designation of “senior” denotes someone who competes at the Olympic and World Championship level…even if said competitor might not be old enough to drive a car. Indeed, the senior performances tendered inside the Xcel Energy Center may well have some bearing on America’s presence in the next Winter Olympics.

But, lest things seem too weighty, Wesley saves his gayest thought for last: “I’m not as interested in who wins, and I am in what everyone will be wearing!”