“Defacing and Refacing” Getting a New Kitchen Recession-Style

That old saw about perception being reality? It’s absolutely true—at least in two instances, one of which where kitchens are concerned. Kitchens always have been an integral part of any home, of course, and in the 21st Century, they’ve enjoyed a kind of renaissance. These days, kitchens—and particularly kitchens owned by members of our GLBT tribe—are more than just the center of food preparation. They have become the center of the entertaining of which food preparation is part. The limelight is cast, more and more, on kitchens. 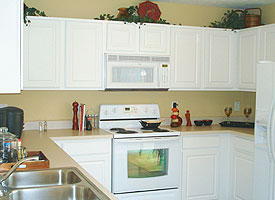 If your kitchen looks like it could serve as the setting for this year’s Annual Transylvanian Convention, you obviously will want to make some changes this spring. Kitchen replacement seems to be obvious option.

Depending on how much work is done—new cabinets, new islands, new tiling, new floors, new counters, new fixtures, new lighting, new plumbing, new cooking implements—a kitchen replacement could cost you as much as a luxury yacht.

Another option that has increased in popularity during the last five years—no, it’s not burning your kitchen down, and collecting the insurance money. This new trend, called refacing, essentially is creating the perception of a new kitchen.

Refacing is the installation of new, usually custom-made, doors and drawer fronts with the application of matching veneers. The analogy most often bandied about by experts is that of a facelift for your kitchen.

One reframing booster says, “I had a friend who did that, and only spent thousands, instead of tens of thousands.”

Another benefit of refacing is that it plays into another trend, perhaps the most vitally important one in the world. Fewer natural resources are used up via the process of refacing, and fewer resources subsequently are discarded, only to end up in a landfill. If your goal is to leave a carbon footprint that’s effectively a tiptoe, refacing is the way to go.

Usually, in each of these reinventions, new countertops and hardware, like pulls and hinges, are replaced with more Jetsons-esque equivalents.

While all this controlled chaos is being perpetrated, most kitchen owners opt to update their plumbing and electrical systems, but these revamps aren’t technically part of the reface.

A reface will take your kitchen out of commission for three to five days, by most estimates. A complete reboot of your kitchen will entail at least a month, forcing you into a food embargo that would make Judy Garland quail.

The selfish, capitalistic reasons for such restructuring are manifold. Improving the appearance of a home is one obvious reason, but a less direct one is that the improved kitchen increases the home’s value—a nice island of stability within the green maelstrom commonly known as the current real estate market. And that’s is another setting where perception is reality.