Say “accent” to people within a certain age range, and most will think of Ricardo Montalbán pronouncing “Corinthian Leather”…but not so with Megan Hoy, Marketing Coordinator at The Tile Shop. She associates that word with one of her company’s specialties: accent tiling. 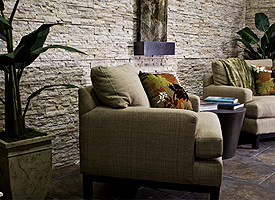 Hoy states, “When I think of accent tiling, I think of tiling outside the norm. It’s not just the floor. It’s not just your bathroom. It’s adding tile to set off that floor, that specialty piece, or the unique textures from unexpected places.”

In other words, accent tiling is nothing short of the empowerment of space.

But there’s more, according to Hoy: “You can use accent tiling anywhere, but I think it’s most fun using it where you wouldn’t expect it to be used. In your living room, you could do an entire accent wall out of rough stone facing—it’s all tile, but you may not even recognize that it’s tiled. Accent tiling is definitely moving toward an art form, rather than something that’s merely functional.”

And where accent tiling is concerned, the what is as vital as the why.

“With our accents, we really try to encourage mixing textures and finishes, whether it’s glass or metal,” Hoy relates. “You might have a natural stone floor, [and] you might use a shiny porcelain or ceramic tiles to offset that. That’s what trends are moving toward: combining different textures with different sizes. That’s what’s going to make it an accent piece.”

Corinthian Leather, alas, has yet to make it into this formula.

The mixing of colors and sizes is also a means to the end of accent tiling.

Hoy explains, “When you’re going for an entire room, and you’re using stone or tile, and you want to accessorize, you want your base to be neutral, and you want the little touches to be the bright colors.”

And when Hoy says, “you,” she means you.

What prevents most latent do-it-yourselfers from doing it themselves is a simple problem of self-image. Most people believe that accent tiling is beyond even the most Vila-esque ken, but, once again, the theme of empowerment creeps into Hoy’s professional prescriptions.

“If you can paint something, you can tile,” Hoy assures. “Everyone can break the stereotype. I’m a young woman, and I’ve done my own tiling. Everyone really can do it. There’s tons of ways to do it, and it’s not as hard as you think it is. I can say that from personal experience. I never would have thought that I could have done my own projects, but I did, and they all turned out better than I thought they would.”

Accent tiling’s value can be measured in multiple ways.

Hoy recounts the testimony of multiple satisfied do-it-yourselfers this way: “When you’re finished, there’s a tactile element. It’s got texture, and it’s got color. It has such enhancing features that accent tiling can really become the focal point of a space. It becomes something you can engage in, or a conversation piece.”

The key to laying one’s own accent tiling is simplicity itself.